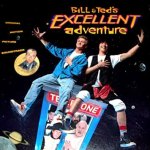 The latest episode of the Hard, Heavy & Hair with Pariah Burke show is currently playing on FM, AM, and Internet radio