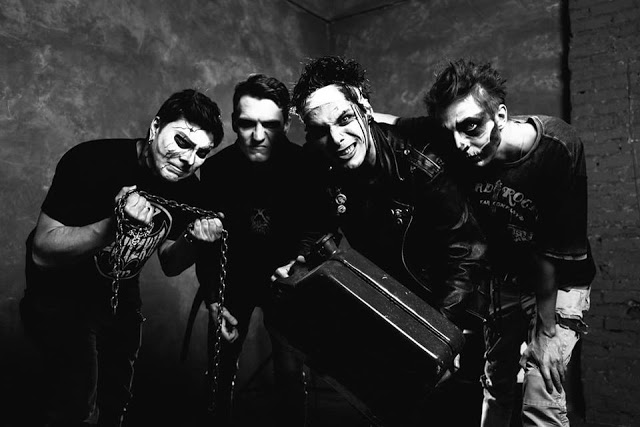 Forming last Halloween's Eve, Chaneys are from Moscow and as they sing about ghosts, werewolves and bloody murders etc. I suppose it's fair to call them

They had a song featured on the recent Outloud! Records' Killer Tunes comp

"> and have also released a debut 6 track ep titled Legacy. If you like your punk music to be from the bowels of hell then this is for you, it's a name your price download so snap it up :
">

They'll soon be clawing their way out of their coffins to tour round their native country and you can check out dates on Facebook, as with all new bands they'd no doubt be grateful if you'd give them a Like : https://www.facebook.com/ChaneysMusic/

The song I've chosen to highlight today is the 3rd track on the ep, it's got a catchy as hell chorus and as the legendary Lon Chaney Jr was best known for his portrayal of the wolfman in the Universal classics maybe these guys will become best known for their werewolf song. This is Lycanthropia...

Feels like I’m going to change
I ceased to recognize myself
Believe me, we’re not the same
The different kind of my shape

Lycanthropia, I’m awed by the moonlight
Another world for me, I’m not used to hide
Lycanthropia

Lycanthropia, I’m awed by the moonlight
Another world for me, I’m not used to hide
Lycanthropia