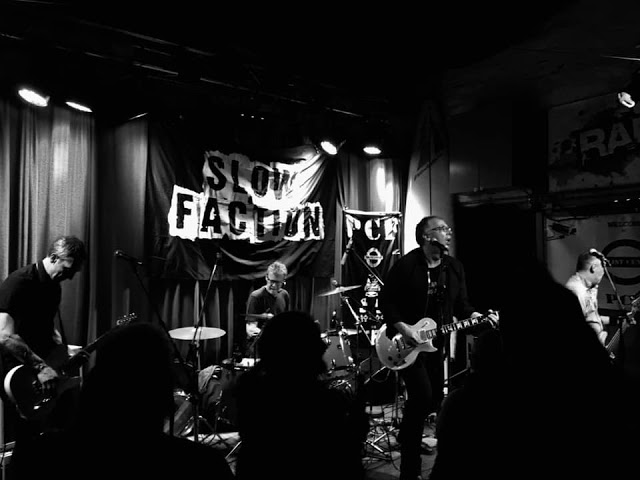 Is it just me, or is 2019 turning out to be a wonderful year for punk music? There's been a large number of album of the

year contenders already released and today you're getting a song from yet another addition to that list.

Slow Faction, the London punk band featuring Kit Gould (drums), Umbi Liszka (bass), Lee Peterson (rhythm guitar) and John Youens (guitar & vocals) are like a talented artist painting a portrait of what they see happening around them. Their canvas is a bleak affair... John's lyrics describe failed politicians putting our country up for sale, he shakes his head in despair as president orange brands anti fascists as terrorists, he calls out the haters who long for a country that never actually existed, he tells little Tommy name-change that he and his knuckle draggers aren't welcome round here. Slow Faction.... a politically charged band describing a landscape darkened by greedy, crooked politicians and racist bully boys. A band influenced by punk's early days that are sadly, 40 years down the line, still having to shine a light on pretty much all the issues that their forebears rose up in protest against. Another influence, Woody Guthrie, was singing songs like these before pretty much anyone reading this was even born and one of his most famous songs gets the Slow Faction treatment on their new album (All You Fascists... is a bonus track). Tragically it's still very relevant.

The album's called Unilateral Declaration Of Independence and it's their best work yet. The cd version should be ready for release by the 5th October but the digital version is already on Bandcamp as a name your price download : https://slowfaction.bandcamp.com/

Aclaustrophobic place to live
Rigid rules and discipline
Ahostile legacy
Of the previous century
An anxiouschildhood full of pain
No understanding, only blame
Asuicide attempt in vain
So they had him sent away