Lost Cherrees - As Long As You Love Me 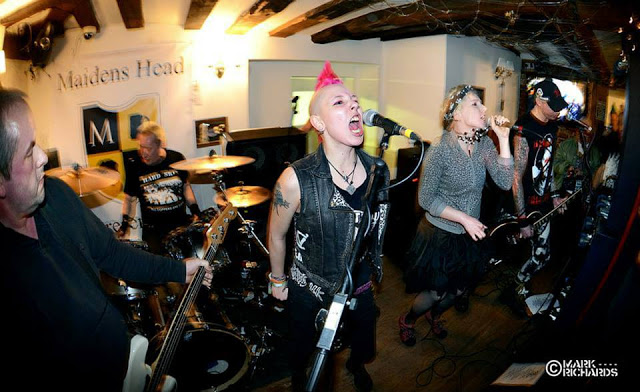 to on a regular basis confident in the knowledge that my bucket will get filled. One of the most reliable of those places is Grow Your Own Records, a label that I can always rely on to satisfy my needs. With bucket full, today I share with you another of their releases.

Lost Cherrees were formed way back in 1979 in Sutton, they're an anarcho punk band and were contemporaries of the likes of Conflict, Flux Of Pink Indians, Subhumans etc as well as being favourites of the much missed John Peel. They became disillusioned and split in 1986 with members pursuing other projects. Increasing interest in their music led to them reforming in 2003 and they've been active ever since. A few days ago they released their new album and as expected, it's great.

The 2019 incarnation of Lost Cherrees features Marie Repulsive, Liss Fitzgerald, Steve Battershill, Trystan O'Connell and Matt Thair. You may have seen them recently play Rebellion, I heard they went down a storm. Unfortunately, despite the band celebrating 40 years since coming into existence, the issues they address in their songs (sexism, misogyny, bigotry, profiteering, warring nations etc ) are still very much in evidence in 2019. We need bands like Lost Cherrees to shout about them. You can get more info here : https://www.facebook.com/lostcherrees/

The album is titled Blank Pages, it's available on ltd edition vinyl and you can check it out here :

I'll play a different song on Sunday's Just Some Punk Songs show but today I'll highlight a song that borrows from a 1968 hit you'll probably remember by The American Breed but which is rewritten to highlight the horrors of domestic abuse. This is As Long As You Love Me...